Borderline personality disorder (BPD) is a serious mental illness that centers on the inability to manage emotions effectively. The disorder occurs in the context of relationships: sometimes all relationships are affected, sometimes only one. It usually begins during adolescence or early adulthood.

While some persons with BPD are high functioning in certain settings, their private lives may be in turmoil. Most people who have BPD suffer from problems regulating their emotions and thoughts, impulsive and sometimes reckless behavior, and unstable relationships

The diagnosis of BPD is frequently missed and a misdiagnosis of BPD has been shown to delay and/or prevent recovery. Bipolar disorder is one example of a misdiagnosis as it also includes mood instability. There are important differences between these conditions but both involve unstable moods. For the person with bipolar disorder, the mood changes exist for weeks or even months. The mood changes in BPD are much shorter and can even occur within the day.

Officially recognized in 1980 by the psychiatric community, BPD is more than two decades behind in research, treatment options, and family psycho-education compared to other major psychiatric disorders. BPD has historically met with widespread misunderstanding and blatant stigma. However, evidenced-based treatments have emerged over the past two decades bringing hope to those diagnosed with the disorder and their loved ones.

* BPD affects 5.9% of adults (about 14 million Americans) at some time in their life
* BPD affects 50% more people than Alzheimer’s disease and nearly as many as schizophrenia and bipolar combined (2.25%).
* BPD affects 20% of patients admitted to psychiatric hospitals
* BPD affects 10% of people in outpatient mental health treatment

Research on the causes and risk factors for BPD is still in its early stages. However, scientists generally agree that genetic and environmental influences are likely to be involved.

Certain events during childhood may also play a role in the development of the disorder, such as those involving emotional, physical and sexual abuse. Loss, neglect and bullying may also contribute. The current theory is that some people are more likely to develop BPD due to their biology or genetics and harmful childhood experiences can further increase the risk.

Research has shown that outcomes can be quite good for people with BPD, particularly if they are engaged in treatment. With specialized therapy, most people with borderline personality disorder find their symptoms are reduced and their lives are improved. Although not all the symptoms may ease, there is often a major decrease in problem behaviors and suffering. Under stress, some symptoms may come back. When this happens, people with BPD should return to therapy and other kinds of support.

Many individuals with BPD experience a decrease in their impulsive behavior in their 40’s.

What does “Borderline Personality Disorder” mean?

Historically, the term “borderline” has been the subject of much debate. BPD used to be considered on the “borderline” between psychosis and neurosis. The name stuck, even though it doesn’t describe the condition very well and, in fact, may be more harmful than helpful. The term “borderline” also has a history of misuse and prejudice—BPD is a clinical diagnosis, not a judgment.

Current ideas about the condition focus on ongoing patterns of difficulty with self-regulation (the ability to soothe oneself in times of stress) and trouble with emotions, thinking, behaviors, relationships and self-image. Some people refer to BPD as “Emotion Disregulation.” 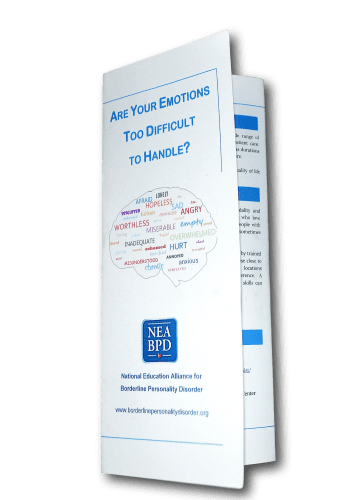 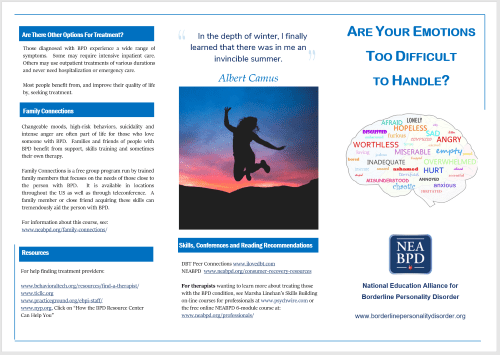 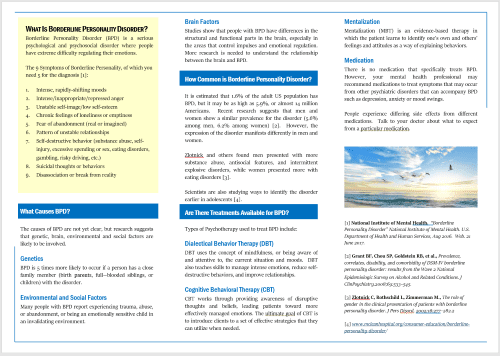 If you are printing on both sides of your paper, make sure
to select on your printer the settings to:”flip on short side of page”.