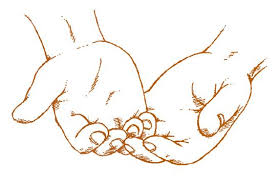 I saw this on Tara Bloch’s blog, and it embodies the spirit of mindfulness and radical acceptance. She says:

“…some years ago, right before our winter meditation retreat, my body crashed. I landed in the hospital, unable to teach, or for that matter to read, walk around, or go to the bathroom without trailing an IV.

I remember lying on the hospital bed that first night, unable to sleep. At around 3 a.m., an elderly nurse came in to take my vitals and look at my chart. Seeing me watching her, she leaned over and patted me gently on the shoulder. “Oh dear,” she whispered kindly, “you’re feeling poorly, aren’t you?”

As she walked out tears started streaming down my face. Kindness had opened the door to how vulnerable I felt. How much worse would it get? What if I wasn’t well enough to teach? Should I get off our meditation community’s board? Would I even be able to sit in front of a computer to write? There was nothing about the future I could count on.

Then a verse from Rumi came to mind: Forget the future … I’d worship someone who could do that … If you can say “There’s nothing ahead,” there will be nothing there. The cure for the pain is in the pain.

I began to reflect on this, repeating, There’s nothing ahead, there’s nothing ahead. All my ideas about the future receded. In their place was the squeeze of raw fear, the clutching in my heart I had been running from. As I allowed the fear—attended to it, breathed with it—I could feel a deep, cutting grief. “Just be here,” I told myself. “Open to this.”

The pain was tugging, tearing at my heart. I sobbed silently (not wanting to disturb my roommate), wracked by surge after surge of grief. This human self was face to face with its fragility, temporariness and inevitability of loss.”