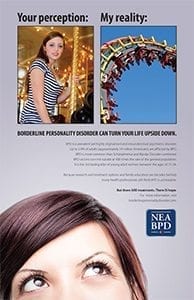 Personal accounts of families turning tragedy into advocacy and hope. These two women offer encouragement to everyone that through knowledge and awareness, “you” can make a difference in the lives of those who suffer from Borderline Personality Disorder.

On May 8, 2007, NEABPD organized Congressional Hearings to educate legislators about Borderline Personality Disorder.

On April 1, 2008, the U.S. House of Representatives passed, by a vote of 414-0, House Resolution 1005 which supports the month of May as Borderline Personality Disorder Awareness Month.

Committee on Oversight and Government Reform

On April 1, 2008, the resolution to designate May as Borderline Personality Disorder Awareness Month passed by a vote of 414-0.

NEABPD will be hosting several events throughout the month of May to raise awareness, express compassion and build a community for those who have been affected by BPD and their families and bring attention to the proven treatments that can help change their lives for the better.

Two Tragedies, Two Countries, One Path”
Personal accounts of families turning tragedy into advocacy and hope. These women offer encouragement to everyone that through knowledge and awareness, “you” can make a difference in the lives of those who suffer from Borderline Personality Disorder.

May 1, 2015: Website launch of the 2nd “Family Connections © Companion Videos Series
A month-long cumulative series of videos, including role plays, introducing and detailing the Family Connections © program. These previously unpublished videos demonstrate how awareness, education, family skills, and support help people with BPD and their families and other loved ones. The videos also support present and former Family Connections © participants in practicing their skills and becoming more effective in their lives and in providing support for their loved ones.

This video series was developed jointly by NEABPD (Dr. Alan Fruzzetti) and the National Office for Suicide Prevention in Ireland (HSE), who very generously funded much of its production.

Borderline Personality Disorder (BPD) is a serious mental illness that centers on the inability to manage emotions effectively. The disorder occurs in the context of relationships and often times all relationships are affected. Up to 5.9% of adults or approximately 14 million Americans are afflicted by BPD.

As common as Schizophrenia and Bipolar Disorder combined, the symptoms include fear of abandonment, impulsivity, anger, bodily self-harm, suicide, feelings of emptiness, and chaotic relationships. Officially recognized in 1980 by the psychiatric community, BPD is more than two decades behind in research, treatment options, and family psycho-education compared to other major psychiatric disorders. BPD has historically met with widespread misunderstanding and stigma; however, evidence- based treatments have emerged over the past two decades by organizations like NEABPD, bringing hope to those diagnosed with the disorder and their loved ones.

BPD afflicts 3 million Americans and accounts for a fifth of those admitted to psychiatric hospitals. The disease, which prevents victims for managing emotions effectively, leads to impulsivity, mood swings, rage, bodily self harm, chaotic relationships and fear of abandonment. BPD victims commit suicide at 400 times the rate of the general public.

“Mental health professionals have recognized this disease since 1980, yet it continues to lag far behind other psychiatric disorders of similar prevalence in research, treatment options and family education,” said Davis. “Raising awareness of this disease is an important first step toward getting the recognition and research dollars that, hopefully, can help future victims and their families avoid the enormous suffering this disease causes now.”

Davis also lauded passage of two measures to improve the District of Columbia court system – one that raised the number of judges from 58 to 61 and another that increased pay for attorneys who represent indigent defendants from $65 per hour to $80 per hour.

Congress previously limited D.C. courts to 58 judges plus one chief judge, unless additional judges were needed for Family Court. The District of Columbia Family Court Act of 2001 increased the number of number of Family Court judges from 12 to 15, which created a backlog among judges not in Family Court. This legislation addresses that backlog.

The move to increase pay for those who represent indigent defendants brings those in D.C. Courts in line with those elsewhere in the federal system, who get $100 per hour.

“These measures should help the D.C. court system perform more effectively,” Davis said. “It’s important that, since Congress has jurisdiction over D.C. courts, that we keep the system functioning properly. These measures will assure the District has the judges it needs and that indigent defendants receive the representation they deserve.”

Madam Speaker, I rise in strong support of H. Res. 1005, a resolution supporting the designation of May as Borderline Personality Disorder Awareness Month. I want to thank my colleague Tom Davis for his leadership on an issue that is very important to many Americans.

Borderline personality disorder can have a devastating impact on people’s lives. While some persons with this disorder may be functioning normally in certain settings, their private lives are often in turmoil. Others are unable to work and require financial support. If Americans would like more information on borderline personality disorder, I encourage them to visit the National Education Alliance for Borderline Personality Disorder website at www.neabpd.org or the National Alliance on Mental Illness website at www.nami.org.

Madam Speaker, this resolution acknowledges the pressing burden of those afflicted with borderline personality disorder and seeks to spread awareness of this under-recognized, and often misunderstood, mental illness. I urge my colleagues to support this resolution.